How To CLOSE The Sale Today: Selling Skills vs. the Hard Close 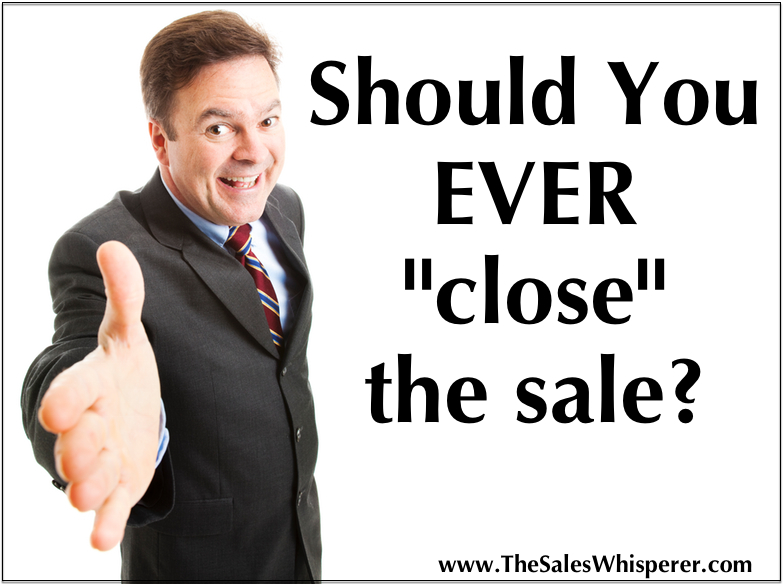 The internet is making sales people soft, both literally and with their selling skills.

Sitting on their Herman Miller Aeron chairs surfing the web instead of getting to the gym is making sales people fat.

Playing Candy Crush and stalking high school sweethearts on Facebook instead of picking up the phone and asking for the order is making them poor.

You have a computer, a smart phone, a DVR, and a fancy dishwasher.

You've owned them all much longer than you've had access to social media and you still can't use any of them "properly and fully."

How often do you see a co-worker—or savvy 11-year old—do something on a computer or iPhone and say out loud "I didn't know you could do that!"

If the tools you've owned for decades are not used optimally, why do you think social media is different?

If you want to live like most can't, you gotta do what most won't, which boils down to two things:

I've written quite a bit on prospecting so let's sharpen our selling skills today by focusing on closing the sale.

You Must Have The Courage Of Your Convictions

Sales people don't make sales for one of two reasons:

Conviction crushes the crutches of "no training" and "the economy" every time.

Case in point: back in May of 2012 my wife hurt her back while exercising.

I was out of town helping conduct an Infusionsoft Accelerator when she did it and she called me from the ER.

I told her to leave the ER and go see our friend, Dr. Nick Schembri, owner of West Coast Chiropractic in Murrieta, CA.

But she had never been to a chiropractor before.

Since she was already at the ER she went ahead with the exam, which, to no surprise, showed nothing on the X-rays and they wanted to give her Valium.

Treat a physical issue chemically with no program for repair, restoration and rejuvenation.

So she went straight from the ER to Dr. Nick and a MAD-WOMAN WAS BORN! (In a good way of course.)

You talk about CONVICTION!

In under 60 days she learned more about the human body in general—and her body, specifically—than she had known in her previous 30...40-something years (age withheld to protect me.)

She told her story—in depth—at least once a day, some days 10 times per day for months after it happened.

I kid you not.

She sings the praises of chiropractic care in general and those of Dr. Nick, specifically, to anyone that will listen. And listen they do.

Since that May day in 2012 we have sent several people to Dr. Nick as referrals and have even met others there to introduce them.

She has passed out his coupons and referral cards and planned mini-reunions around his monthly family days.

As I update this post in the fall of 2019, we've been on a family plan with him ever since. (If the husband and wife are on a retainer he sees all seven of our kids for free. How's that for family-friendly?!)

In short, my wife has been moved by the "Chiropractic Spirit" and she is closing people on the need to do as she says and as she does.

You bet your bottom dollar it is.

But, Wes. She's not earning a commission. She's not doing this as a sales job. She's not getting paid for telling people her story. She's not an actual salesperson for Dr. Nick. But, Wes,..." (Wait for it. Wait for it.)...

My business is different."

You're missing the point.

The question you should be asking is "How can I get that convinced—that CONVICTED—about what I do in order to eliminate all fear, all hesitancy, all limiting self-doubt about what I sell so I can tell the world and EXPECT the sale?"

Sidebar Uno: Tony Robbins explains the power of questions—change the questions you ask yourself and change the direction of your life.

Sidebar Dos: The truth doesn't matter if you're asking the wrong questions.

When you are passionate and convicted in what you do, you not only expect the sale, you drive the interaction, you guide the discussion, you assume the close, and it happens because your willpower was greater than the prospect's.

We read dozens of times in the Good Book that people are sheep.

Even "big, powerful executives" are looking for people to stand up and be counted, to make decisions, to be clear and confident enough to help them make decisions.

If you lack belief in what you do, what your company does, what benefits you bring, then you can bet your next commission you will not make the sale. (You are literally betting your commission check every time you go into a sales situation without a plan.)

When your prospect believes more in your shortcomings than you believe in your upcomings (that's a new sales word I just made up) a sale is lost.

To close more sales you can be a pushy punk and try outdated gimmicks like the alternative of choice close, the feel-felt-found close, the if-then close, tie-downs, etc., or you can sharpen the most reliable of all selling skills, the courage of your conviction.

Like surfing the web or picking up the phone, the choice is yours.