When did LSU win their last national championship in football?

LSU fans and sports enthusiasts will roll their eyes at the simplicity of the question and proudly declare January 13, 2020, which is when LSU beat Clemson in the Superdome in New Orleans.

Technically that is the correct answer.

That is when the game was played.

However, they would also be technically wrong, because as any great coach knows, you're only as good as your last recruiting season.

LSU's awards for the 2019 season included:

Looking at some specifics, LSU's starting quarterback—a team's most vital player— was a 5th year Senior who transferred to LSU two years prior to the 2019 season, so LSU was in talks with Joe Burrow in early 2018.

However, based on NCAA recruiting rules, LSU was allowed to correspond, visit high schools, watch games, meet parents, and high school coaches during the high school junior year of their recruits, which would've been as early as the summer of 2012 for their current fifth-year seniors.

So you could make the argument—and I am—that LSU won the 2020 championship game nearly seven years earlier when the recruiters at LSU identified their future fifth-year seniors.

Now, just two days after the national championship victory, six juniors have declared their eligibility for the NFL draft.

But Coach Ed Orgeron knows how to recruit, lead, and inspire, so I'm willing to bet they'll be back as contenders next year despite their player and staff turnover.

So let me ask you something: how well would your company perform in seven months if you lost 25% of your best people, including the #1 performer in the nation, today?

Would you even be open for business?

Now do you see why I say that the #1 job of a sales manager is to recruit?

If Ed Orgeron, the head coach of LSU, had recruited a 5'2" former gymnast as his starting quarterback, would they have won the championship in 2020?

But Wes, that little guy has a great worth ethic, a wonderful attitude, a pleasant demeanor and he's the epitome of a 'team player.'"

Let him go back to the gymnastics team where he can contribute and leverage the talents God gave him.

But to play him—let alone recruit him—puts the team at risk, the coach's job at risk, and would literally put that guy in harm's way physically.

You need to recruit and nurture "eagles" and let the "turkeys" languish until they go away on their own or learn to fly with the eagles.

Too many sales managers spend all of their time and energy on the duds trying to "coach 'em up," while literally ignoring their superstars.

"But Wes, the superstars want to be left alone. They want to do their own thing. They're self-motivated. It's my job to get everyone up and over their sales quota."

NO IT IS NOT AND NO THEY DON'T!

It's not your job to ignore the superstars.

It's not your job to get everyone to their sales quota.

It's your job to keep your top-performers both happy and productive.

It's your job to identify and nurture top sales talent and cut the non-performers.

Hey, let the weaklings, the under-performers, the undisciplined play some more so they feel appreciated and loved."

I played in high school and college. It's brutal.

Stink it up once: get the tongue-lashing of a lifetime.
Stink it up twice: enjoy sitting on the bench the rest of the game.
Stink it up in practice after that: enjoy watching the game from the stands as a former player.

You need to adopt the same approach with your sales staff.

Implement a policy of cutting the bottom 10% of performers every year.

Install a Careers tab on your website that lets people know your doors are always open for top-performers. (Remember this post about All Stars?)

Implement a rigorous program of excellence with your sales staff that starts with weeding out the drama-queens, divas, and job-hoppers from ever even applying in the first place.

Then put the screws to them in the interview process.

Then put the fear of God in them when they start.

Then show them EXACTLY what to do to make their numbers. (You do know what it takes to succeed, right? [I know you don't and you're not alone. Let's talk.])

Now that you've shown them EXACTLY what to do you can measure activity and pay on results.

Then you can implement an atmosphere of excellence by conducting regular training of your staff so they are always improving. (You do have regular training, right? [I know you don't. Let's talk about this.])

Then you'll win four championships in eight years and you'll survive turnover and you'll thrive in times of turmoil and chaos when your weaker opponents are suffering from their self-inflicted wounds that happen every time they took a short cut and focused on cheap wins today vs. longterm wins tomorrow.

When you have a solid recruiting plan in place, like No More Sales Duds, sales come easy.

How good is your recruiting?

Tomorrow we'll look at the third part of this 3-part series as we consider the #1 job of a business owner.

Put the Screws To Them

There can be only one. (Name the movie and win fabulous gifts, prizes, and untold riches!) 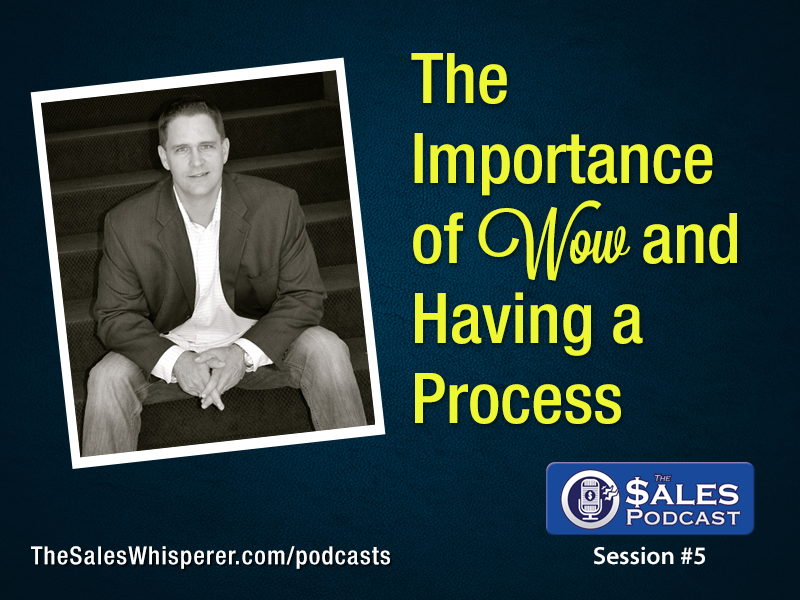 TSP 219-5: The Importance Of WOW and Having a Process