If you were arrested for being in sales and marketing, would there be enough

evidence to convict you?

I took the picture above of the garage sale sign my sister-in-law asked me to hang for her.

As you can see in the top right corner, the garage sale was going from 7 am to noon.

When I hung this picture it was around 8:15 am.

I had stopped by with my wife to drop off some items we wanted sold, and as we approached her house we noticed only one sign, which was on the corner closest to her house, which is set back several turns into her neighborhood.

We asked her if she'd like us to hang some more signs on our way out. She told us she had them ready but just didn't have the time to go out and hang them.

This happens every day in the majority of businesses across America and the world.

Business owners "throw a party" in the form of a new product release or even an actual launch event / party, but fail to promote it like they should expecting inbound sales to just manifest because they think that's how the universe works, and it turns into a flop.

We've fallen victim to the "well-marketed" adage that if you build a better mousetrap people will beat a path to your door, even if it's in the woods.

SIDEBAR: Ralph Waldo Emerson is credited with the mousetrap story, but he didn't say it. At least not in a memorable manner.

An ad man, Elbert Hubbard wrote it better a full 28 years after Emerson died and credited it to Emerson.

You see, Hubbard knew the importance of marketing and he marketed like he meant it.

Would you like to read the full story? Turn to pages 18-21 in Roy H. William's book, "The Wizard of Ads," and tell him Wes sent ya.

Here's the interesting part of the story... As I was taping up the first sign a car slowed down, the driver rolled down the window and asked "which way?"

I pointed and off he went.

Before I could hang the second sign a car passed me, made a U-turn and took off towards her house.

Thanks we had a rush of people."

She got "a rush of people" from some construction paper signs written with Sharpies and put on street poles with duct tape. (See. Duct tape really can fix anything, which reminds me, it's time to re-read John Jantsch's classic "Duct Tape Marketing Revised & Updated: The World's Most Practical Small Business Marketing Guide.")

Believe it or not, your business can grow with simple tools just like that.

Sure, there are fancier, more sophisticated, more expensive, more elaborate ways to market your business, and some of them even work, but get the little things right. Your product or program is good enough.

Launch it.
Market it.
Sell it.
Get feedback and improve it and then launch and market and sell the "new and improved" and get more feedback.

What's holding you back from sales success is not your lack of skill or the competition or the price of oil or how your team played last weekend or your struggles at home or the fact you're behind on your house payment.

What's holding you back is your failure to implement and implement fast.

Ready to stop making excuses, get some tough love and implement fast? 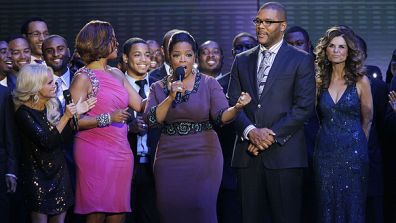 In the meantime, let's learn from what Oprah has done really well

Right now! Why not you? Why not now?