Are you an aspirin or a vitamin?

One brings relief immediately but can create longterm damage while the other takes a long time to work but creates longterm benefits.

Everyone will pay top dollar for one but will look for deals or skip the other in order to make room for instant gratification.

We live in the nation of Procrasta. (Some call it "Procrasti." I think it depends if you're Italian or Polish. But I digress.)

In the world of Procrastination, for every one Boy Scout out there that thinks ahead, performs that one stitch in time to save nine, and is always prepared, there are nine who are bumbling through life fat, dumb, and moderately happy.

So you can sell sewing kits to the one—there is a need for them—or your can sell emergency sewing services or custom clothing with same-day alterations to the nine.

As I said, both are needed and there it is totally fine to make a good living selling either/or.

(However, there's less competition in selling a high-end solutions to smart consumers, so there's that.)

However, however, both the masses and the more discerning buyers will still question the cost of the gym membership and the cold pressed green juice from time to time...but have you ever heard anyone in the emergency room asking how much the heart surgery would cost?

JUST GET THIS BUICK OFF MY CHEST, DOC!!!"

How to get the prospects to tell you their pain, i.e. how close they are to buying and how much they'll pay for it

I know the heart attack patient is an extreme example, so how does this look in real life?

Most entrepreneurs launch their dream business because they think they've built a better mousetrap.

If you build it they will come."

It's just not true.

A salesman by the name of Hubbard did. Hubbard attributed the quote to Emerson to give his own success gravitas.

So the story—not the efficacy of your widget, gizmo, or proprietary methodology—is the secret to sales success.

But most professional salespeople, sales managers, business owners, and entrepreneurs don't know if they're selling an aspirin or a vitamin.

(Sidebar: I know that in marketing it matters A LOT what you selling because you need to be clear on that so you can create your message to market match. But I discuss that in the #1 Job of a Business Owner. It ties in nicely with the #1 job of a salesperson.)

To do your #1 job well when your prospect is in front of you—or on the phone or on a Zoom call—you need to dig in.

They look at the patient standing in front of them and calmly ask,

However, typical salespeople hear someone holler from a little paper cut and put them down as a "hot prospect" with an "upside of $10,000-$15,000" for the hospital without ever going deeper to determine if it's a real prospect or not.

In a sales scenario, when you are engaging a prospect who is either dancing around the subject, playing coy, playing hardball, or just not sure what they need or what their budget is, simply ask...

How did you make this purchase before?" or

What process did you follow when making this purchase last time?" or

When you are evaluating a new (vendor/partner/hardware/software solution) who on your team do bring in to run point on this?"

You see what I'm doing here?

I'm making one of "The 7 Deadly Sins of Selling."

I'm assuming the prospect has either bought something ilke this before, that they have a process for analyzing how to make a wise purchase, and/or they have a team of advisors on their staff or on retainer who can help them make this decision.

Why would I make that assumption?

Because it's a promotion to them.

I'm complimenting them on how smart and powerful they are.

Instead of telling them why they should buy from me, I'm opening the door to have them tell me the right way to go about making this deal happen.

And then it happens.

They jump back, roll their eyes, and scowl a little as they reply...

Ha. I've never bought something like this before. My current one just stopped working and I need to get it replaced ASAP!"

Dude, this just got dropped in my lap. I'm flapping in the wind here."

Ha. Whatever. Team? Yeah, right. I'm on my own here and, frankly, it kinda pisses me off that this got thrown in my lap with everything else I have going on."

We can't just walk up to a prospect and challenge them with:

So don't challenge them.

Promote them with a gentle, complimentary assumption, and see how the conversation unfolds.

Because when you challenge a prospect it rarely goes well for several reasons.

And here's the bottom line: Unless there is extreme pain in the prospect—pain they acknowledge and quantify—you'll experience extreme pain as the salesperson.

Great salespeople do not sell.

They sort, sift, and separate.

They follow the advice of my buddy Patrick, who always says

Since 2007 I've run and grown my business by making it easy for people in pain to find me.

Toot Your Own Horn Or There Is No Music 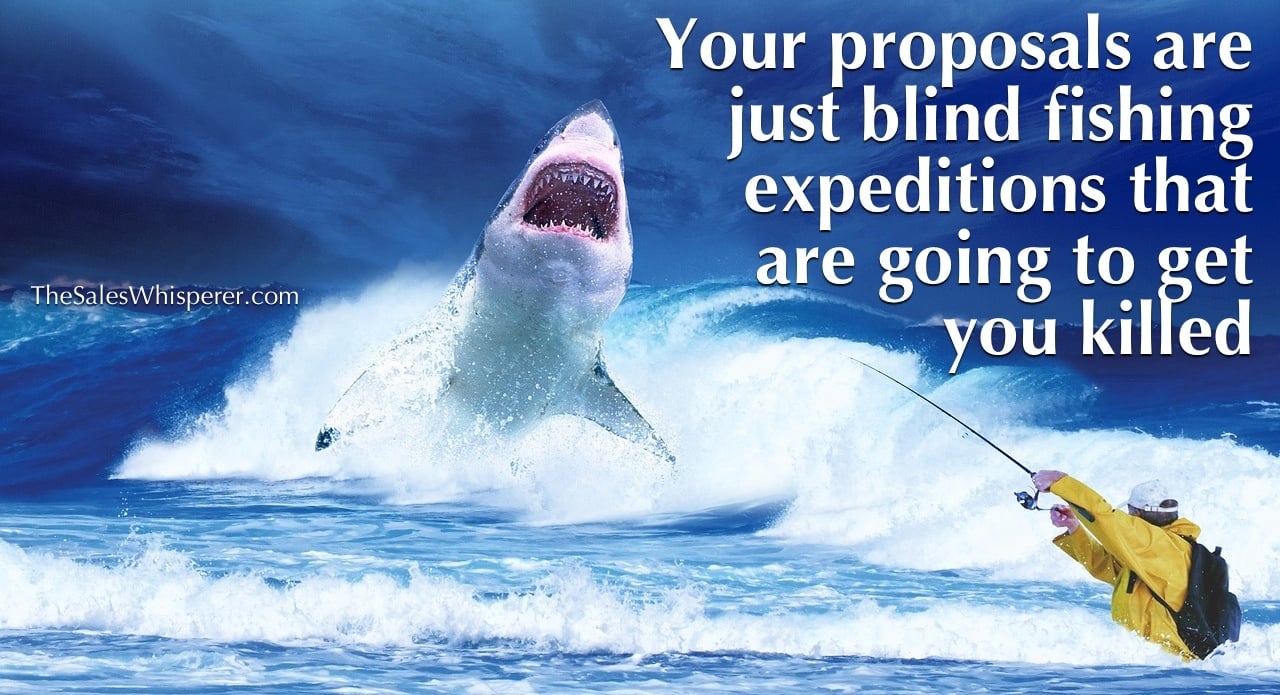 The Four Outcomes From Your Business Proposal (Three Are Bad)

Three things can happen when you put a ball in the air—and...