Grown Ups Own Up To Their Own Mess Ups

Yesterday I wrote about my youngest of seven, Ava, and how success clues are everywhere.

Before that I discussed our need to form new thoughts and ideas rather than just opinions, which are a dime a dozen, everybody has one, and they all stink.

And a few days before that I penned a few words on why we need to quit lying to ourselves and how form follows function, meaning the position in which you find yourself in life is a result of the previous actions you have taken. So pay attention to what you've done to understand how you got to where you are.

As I reflected this morning on these previous posts I realized there is a common theme connecting them, which is essentially that we need to be grown ups if we are to reach our goals in life. (You do have goals, right? And you do have written goals, correct?)

Part of being a grown up—and built into the very word—is "own." We need to take ownership of everything if we are to succeed at any endeavor.

It's interesting how two men I've studied over the years make ownership, discipline, and responsibility key components of how they live their lives.

One is Dan Kennedy. (That me in the red with Dan Kennedy at the Anaheim Convention Center in 2008.)

Years ago I heard him tell a story of how he took responsibility for being rear-ended.

Sure, legally the kid that hit him was at fault but Kennedy said he was the one running late.

He was the one that decided to take that specific route to his destination.

He was the one that put himself in that exact spot at that exact moment in time.

Kennedy took extreme ownership, which is the title of the book of the other gentleman I have been following closely this last year, and his name is Jocko Willink. 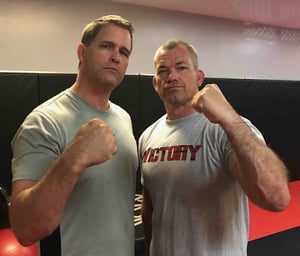 (That's me after training a little Brazilian Jiu-Jitsu with Jocko in 2017.)

Jocko is a former career Navy SEAL who now hosts a podcast, speaks, and consults with businesses on how to take responsibility for their actions, address their issues head on, and overcome them.

Both Kennedy and Willink live by the equation of discipline = responsibility.

Kennedy has the discipline to write 1,200 every day, rain or shine.

He even wrote 1,200 words on the morning he buried his mother.

Jocko wakes up at 4:30 am every morning, takes a picture of his watch and posts it to Twitter, then hits his garage gym to exercise. He has three alarm clocks to ensure he gets up and gets going.

What do you need to own up to in order to be the grown up you were meant to be?

Who is holding you accountable?

Maybe it's your spouse.

Maybe it's your kids.

Maybe it's your business partner.

Maybe it's your sales and entrepreneurial peers along with me.

When you work with me, you will experience extreme ownership.