The Saints, led by Archie Manning, hosted the Atlanta Falcons and—as was usually the case back then—they lost.

Uncle Jimmy had season tickets even though the Saints weren't all that good. (How's that for political correctness? The "Ain’ts," as many called them, were terrible! My, how times change.)

But my uncle loved the Saints.

He believed in them.

He got angry at their performances, but he never gave up on his belief that the Saints were the best team in the NFL.

Fast forward 43 years from their entry into the league—and 31 years from my attending that first game—and the Saints became Super Bowl Champions.

Over the years their personnel changed (remember the earlier letter on recruiting?) and their playbooks changed, but their focus did not: Win the Big One!

Do you have a goal so big you're willing to consistently work towards it for two generations, through the scoffing and laughter of all who see you? The first step to success is having a legacy-building goal. (The second step to success is Delivering a Powerful Message in a Powerful Manner. I address that in the book.)

In 1967 David Dixon created plans to construct the largest fixed dome structure in the world—the Super Dome in New Orleans—to house his brand new NFL expansion team that hadn’t even played a down. Dixon began building the largest stage in the world for a team that only existed on paper. (How’s that for dreaming big?)

He delivered his powerful message in a powerful manner.

Dixon’s new team would be the best as he predicted 31 years earlier.

But he didn't do it alone.

In fact, he obtained the assistance of business leaders and politicians all the way up to, and including, the Governor of Louisiana, to make his dreams come true.

If you don't have access to the Governor of your state to make your dreams come true but could use a little encouragement from time to time find and/or start a mastermind group. (You’ll see this idea come up often in the book.) You may also be interested in my tough-to-afford-but-oh-so-worth-it private coaching.

The goal of any program like mine is to hold you accountable to improve at least monthly, if not weekly. You need to improve the creation and delivery of your powerful message. You need unbiased advice (and a swift kick in the rear from time to time) and fresh perspectives and ideas on how to get closer to your 43-year goal.

Whatever you choose, get started today because 2061 will be here sooner than you think.

"The real fact of the matter is that nobody reads ads. People read what interests them. Sometimes it's an ad." ~ Howard Gossage

Do you produce interesting ads? ~✯~ 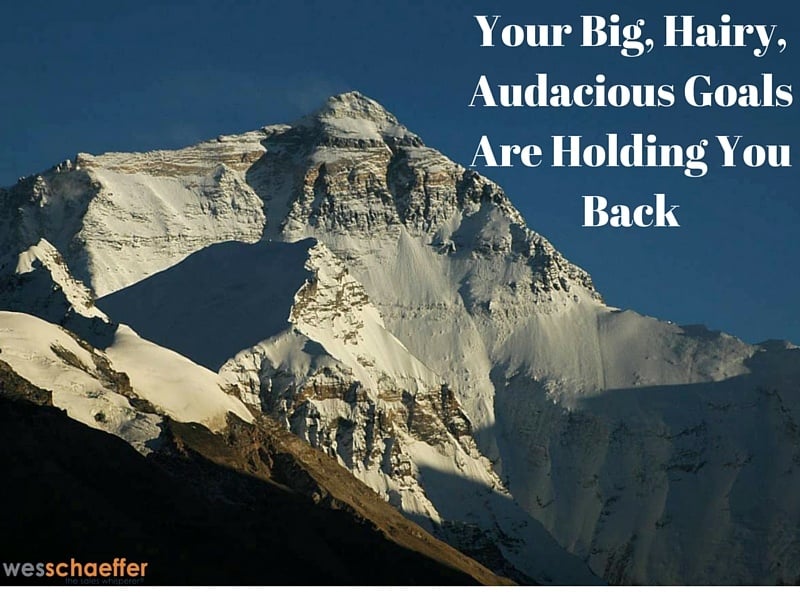 Your BHAGs Are Hurting You: Do Clear Goal Setting

Stephen Covey was mostly right when he said

Begin with the end in mind."

Goodbye SMART GOALS: The Science of Goal Setting In 2022

If one does not know to which port one is sailing, no wind is favorable."

Seneca, the OG high-performance-guru, philosopher, and stoic uttered those profound words around the time the New Testament was being written.