In 324 episodes of The Sales Podcast I've interviewed at least three dudes that have been in prison and built something meaningful upon their release.

One guest was taken from her friends' arms in front of a frat house in college, raped by three men, then thrown into the cold Dallas December night half-naked and forced to wave down help from passersby.

One guest was taken hostage in Somalia and rescued by Navy SEAL Team 6 after 73 days in captivity.

Many have gone through bankruptcy.

Many have gone through divorces.

Many have had partners steal from them.

Many have lost their businesses and risen from the ashes.

Many have faced and beaten health issues brought on by the strains of life and being in sales and entrepreneurship.

Over these five years I've asked myself literally hundreds of times how I can help people find themselves and lead them from just trying to survive to actually thriving without hitting rock bottom first.

On the one hand you may be stubborn and stupid (they tend to go hand-in-hand) and need to hit rock bottom face first and hit all the “stupid sticks” on the way down so you have nowhere to go but up.

On the other hand you may fall so deep and hit so hard that you just can't climb back out.

But if you can toughen up before you hit rock bottom—like getting inoculated from smallpox by getting a little bit of cowpox—you either won’t fall as far, won’t hit as hard, or you’ll be strong enough to endure the hit so you can bounce back.

Admiral James Stockdale, who was awarded the Medal of Honor for the manner in which he conducted himself as a POW for over seven years in Vietnam said “One should include a course of familiarization with pain” as an aid in helping you survive tough situations.

Since we all define “tough situations” differently, it’s important to get uncomfortable as often as possible in as many varied situations as possible to ensure you are “hard to kill,” be that literally, in your relationships, in your sales career, and/or in your business ventures.

In the summer of 1989 I went through the training that evolved from the experiences pilots like Stockdale endured. It was called S.E.R.E. and stands for Survival. Evasion. Resistance. Escape.

We were taught how to survive in the wilderness if shot down. How to evade an armed, hostile enemy looking to capture and/or kill us. How to resist interrogations if caught. And how to escape if captured.

It sucked but it made me tougher.

Fast forward 29 years and I’ve placed myself into too many tough situations to count, with 22 of those years being spent in sales, and 12 as a business owner teaching sales training, marketing, and business coaching to professional salespeople, sales managers, business owners, and entrepreneurs.

The reason I have a career is because motivated people like you recognize the risk of going into a sales opportunity without practicing and preparing for every scenario.

You are willing to get punched in a safe training environment to learn how to handle the blows your prospects will throw at you.

You know that “winging it” is for amateurs, sloths, and fools.

You are none of the above.

You will watch the 41 pre-recorded videos.

You will read the 60+ page study guide.

You will set firm goals.

You will agree to be held accountable by your peers and me.

You will show up and participate for nine straight weeks to get better as a professional salesperson.

You will engage daily in our private group and both ask good questions and help answer those of your peers.

You will master the skills it takes to Make Every Sale.

Get Paid What You're Worth With Sales Training From Joe Ingram 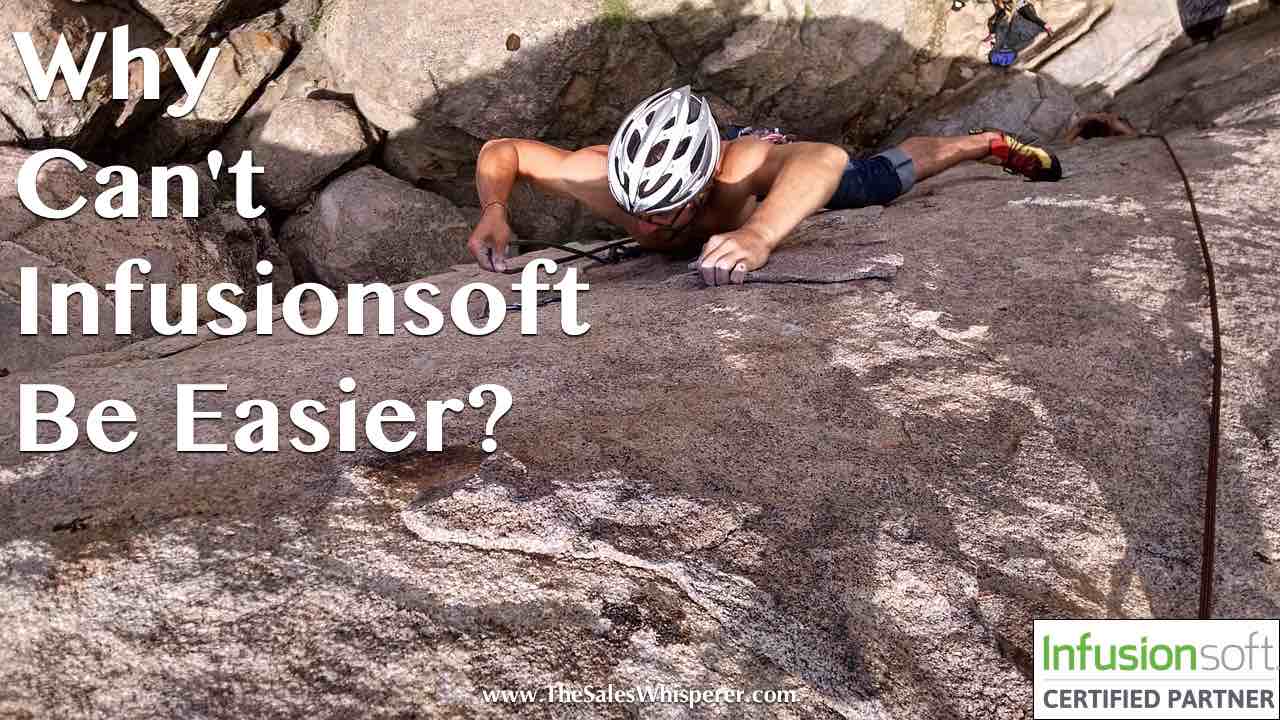 Why Can't Infusionsoft Be Easier To Use?

Is Infusionsoft Hard To Use?

Recently a friend of mine who is still in his demo stage on Infusionsoft asked,

"Why are some of the Infusionsoft features hard to use?"

Every time I hear